Searching for a Cancer Cure in "Hypocrisy" 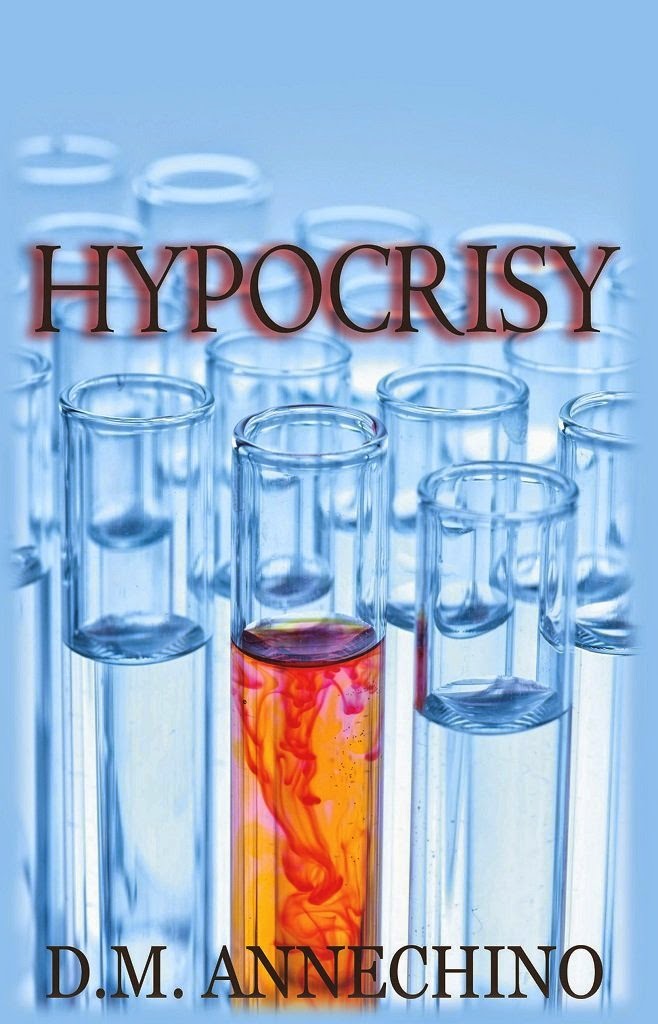 While cat and dog sitting for my best friend over the weekend, I pounded through a couple of novels to review for you this week.

What did you do on your off days?

First up today is a police procedural mystery by author D.M. Annechino.  Hypocrisy explores the world of the pharmaceutical industry, research and development, and how great the change to the landscape if a cure for cancer were discovered.  I latched onto the opportunity to review Hypocrisy, as my mother's cancer several years ago quickly revealed the myriad and dizzying levels when dealing with this diagnosis.  From support systems, to charities, and surgery to post-operative treatments that follow you for years and years, the cancer web is an intricately spun enterprise.

Book Blurb:
Dr. Lauren Crawford is a brilliant research scientist who discovers a revolutionary treatment for cancer that not only extends life, but much improves the quality of life for terminal cancer patients. The treatment, in some instances, can even cure certain cancers. On the evening before Dr. Crawford holds a press conference to announce that the FDA has given preliminary approval of her new cancer treatment, somebody follows her to her car and puts three bullets in her head. Was it a planned murder with a motive, a mugging gone badly, or merely a random act of violence?

Two New York City homicide detectives, Amaris Dupree and T.J. Brown, are assigned to the investigation. The detectives evaluate the circumstances surrounding Dr. Crawford’s death, and follow a trail of clues that exposes a sequence of startling facts. One by one, the detectives carefully examine each suspect and piece together a puzzle with unimaginable implications. As the investigation gets more intense, and the detectives get closer to solving the murder mystery, someone threatens Dupree’s life. The detectives now realize that Dr. Crawford’s murder was much more than a homicide. And if they don’t arrest the murderer soon, Dupree might be the next victim.

My Review:
Hypocrisy started with a bang - literally - as we experience Dr. Lauren Crawford's final moments before her life is snuffed out by a killer.  We quickly see how devastating her loss is, not only to her mother but to millions worldwide who had the potential for a cure from cancer.  Once her own mother was diagnosed with the disease a few years before, Dr. Crawford stopped at nothing in her attempts to prolong her mother's life and find a cure.  Mere days away from finalizing the FDA's requirements, forward momentum and funding for research ceases with her death.  But is Lauren's death a random mugging gone wrong or is something more sinister at play?

Enter Detectives Amaris Dupree and TJ Brown, homicide partners throughout the last six months who continue to struggle to understand one another.  TJ is continually late or absent when Amaris needs him on this case because Dr. Crawford's death brings back memories and regrets that have haunted her for years.  Somewhere in the midst of the investigation, the two have to come to terms with their own demons if they're ever going to mesh as a team.

I'm still a little torn on Hypocrisy.  The story started off quite well, giving the reader hints along the way at each players' tragic pasts.  I found Amaris to be a relatable character, though TJ didn't get fleshed out as well as I'd like to have seen.  He felt more like an unloyal-turned-loyal pet on a leash instead of a character with his own merits and abilities.  Now Brenda, the support analyst at the precinct, was a lot of fun and I'd have enjoyed seeing more of her interactions with the partners.  Then the dynamic between Amaris and TJ fluctuated so much it felt as if they were merely players on a stage directed with a heavy hand as they toggled back and forth.  It made their motivations and actions toward each other stiff and stilted, suddenly turning from hot to cold and back again.

Initially the plot moved along quite well and was focused, and I really enjoyed reading during this time.  But by midway through the novel it felt as if the mystery had taken a major backseat to the little side squabbles that really didn't do much to move the story along and grew rather rambling as if added as filler.  A bit too much telling during this phase contributed to the drag as well.  However, point-of-view was handled well and properly delineated by scene and chapter breaks.  Thumbs up for that!

Additional editing would be helpful for Hypocrisy, as there were several instances of the wrong word utilized (here/hear and you're/your) as well as a Nissan Ultima instead of Altima - sorry, I'm a car nut and this really stood out.  There were a few formatting issues such as hard returns within sentences or extra spacing, but this was more a minor issue.

The biggest problem I had was the plethora of improper procedures utilized by the detectives.  Once the investigation really got underway, there was a constant stream of suspects brought in for questioning, many of whom were hardened criminals, and then broke with little provocation.  Then when someone asked for an attorney, the detectives didn't stop with their questioning like they should have.  They started offering plea bargains without bringing in or consulting with the D.A.'s office.  DNA matching in less than 24 hours?  I can stomach play on reality, but this just went on and on to the point that I shook my head in disbelief.  The greatest frustration was when they had someone in interrogation who admitted to involvement in the conspiracy, they had solid evidence on the guy that he'd committed a crime, and yet they simply let him WALK OUT THE DOOR???  Nope.  Huh-uh.  Didn't work for me.

By the end, everything tied up in a nice, neat, and completely expected little bow - and yet it felt hollow.  What started out as a story with great potential ended up leaving me feeling disappointed.  I liked Amaris and would've enjoyed Hypocrisy much more without all of the little side filler stories, the odd and unnecessary interactions between Amaris and TJ, and if it would've had more believable procedural interplay.  I'm going to have to settle on three and a half stars.

If you're into police procedural mysteries and Hypocrisy sounds like something up your alley, pick up a copy at Amazon.

Daniel M. Annechino, a former book editor specializing in full-length fiction, wrote his first book, How to Buy the Most Car for the Least Money, in 1992 while working as a General Manager in the automobile business. But his passion had always been fiction, particularly thrillers. He spent two years researching serial killers before finally penning his gripping and memorable debut novel They Never Die Quietly. His second book, Resuscitation (Thomas & Mercer 2011), a follow-up to his first novel, hit #1 in Kindle sales in the UK and reached #26 in the USA. He is also the author of I Do Solemnly Swear (Thomas & Mercer 2012). Hypocrisy, is Annechino's fourth novel.

A native of New York, Annechino now lives in San Diego with his wife, Jennifer. He loves to cook, enjoys a glass of vintage wine, and spends lots of leisure time on the warm beaches of Southern California.

Find out more at: dmannechino.wordpress.com
Posted by D A Bale at 2:45 PM