Today I am pleased to host William Brian Johnson, author of "Hell to Pay" from Hellfire Publishing.  Brian recently finished his Coffin Hop blog tour during the Halloween season and has taken time from his Thanksgiving preparations to talk to us about this supernatural horror thriller.

WBJ:     A man who thinks he's losing his soul, meets a man who has.  Detective Michael Bailey is an ex-alcoholic police detective investigating a series of murders, where the main suspect may be possessed.

DAB:     What prompted the novel's premise?

DAB:     Okay, so then which character in "Hell to Pay" do you most identify with, if any, and why?

WBJ:     I think as a writer you tend to identify with all of them.  The characters themselves are bits of my personality mixed with other friends' personalities and traits.  I hate to say it, but the time I wrote it, I identified with Bailey the most.

DAB:     Why do you hate to say Bailey?  He is your protagonist, after all.

WBJ:     Bailey is a redemptive character, so he starts off with the entire world bearing down on his shoulders and isn't always the nicest individual.

DAB:     I see.  So were there any characters you found difficult to write?

DAB:     Bailey's girlfriend - why Isabella?  Was it just the aspect of writing from a woman's perspective?

WBJ:     Not only was it difficult to write from the woman's perspective, but I think the personalities I combined for Isabella's character clashed in a couple of instances and required a little rewriting and reinventing.

DAB:     How long did it take to craft this novel?

DAB:     But was that 2.5 years editing, editing, and more editing included?  Obviously it worked - you succeeded in securing a publishing contract, which can be difficult to do in today's ever changing market.

WBJ:     Nope, took me 2.5 years to write.  Editing took six years around sick parents, children being born, job changes, moving, in other words...life.  A couple of the topics in the book came to pass, a sick parent on their deathbed, the economy going to Hell, and I found the light at the end of a very long and dark tunnel.  I'm not denying happy endings exist, but as a close friend will tell you, sun shines on a dog's ass occasionally.

DAB:     I think most of us can understand that.  Let's talk more about the writing process.  There's always debate over whether or not to outline when starting to write a novel.  What typically works best for you?

WBJ:     I write pivotal scenes, then write the back roads to each.  I usually don't outline but will have notes.

DAB:     I'm a notes person myself as well.  Do you have any other writing pointers for our audience?

WBJ:     Listen to your inner editor but don't stop writing.  I've had bad critiques before, get over it and keep doing it.  Keep trying, keep writing, and someday you too might have a book you're proud of.

DAB:     Thanks so much for stopping by.  Please give us the final plug for "Hell to Pay".

WBJ:     "Hell to Pay" is a haunting story about the loss of one's life, redemption, and personal sacrifice.  This supernatural thriller is strongly based on Joseph Campbell's epic storytelling and mythology.  Buy my book.  It will scare the hell out of your Christmas.  Now available in e-reader format and coming November 23rd, "Hell to Pay" rises from the ashes in paper.  See http://www.hellfirepublishing.com/hell_to_pay.html for more details.

There you have it, dear readers!  If you'd like to have a nightmare before Christmas, pick up your eBook copy today or pre-order the paperback coming out this week.  Have a fabulous and filling Thanksgiving! 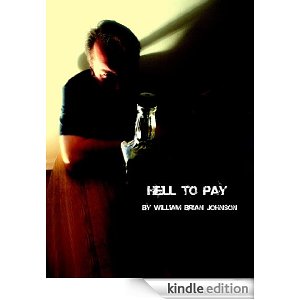 Just in time for Thanksgiving!

Smashwords has officially approved Running into the Darkness for their premium distribution catalog, which means you can now purchase it in any eReader format.

So feel free to go to this link http://www.smashwords.com/books/view/98766 and download a free sample to (hopefully) whet your appetite.

Stay tuned also for an upcoming book review for William Brian Johnson's "Hell to Pay", available also in eBook format from Hellfire Publishing.
Posted by D A Bale at 3:36 PM No comments:

Now Available - Get It While It's Hot!

Just a quick note tonight to let you know that Running into the Darkness has been accepted to the Amazon Kindle Edition site and is live.

How awesome is that?

Just run over to http://www.amazon.com/ and pull up Running into the Darkness under their Kindle store.  As soon as I figure out a way to attach the link via the cover image to both Amazon and Smashwords I will do so.

I'm just not that technologically savvy yet, but I'll get there soon. :-)

The eBook edition is $1.99 at either store, a great bargain if I do say so myself.

You can also find me now on Twitter and Facebook under D A Bale.  If I have time available tomorrow, I will also figure out how to link directly to these sites as well, that is if I can get Mighty Bri to assist.

It's that pesky techie issue again.

Just a reminder again - this story is not for the faint of heart (nor the young).  It takes the depravity of the human mind and soul and displays it for all to see (or read).  Definitely an "R" rating.

You can't say you weren't warned.

Even if you don't own a Kindle, you can download the Kindle reader application directly to your PC - best of all it is FREE!

So please visit Amazon this weekend if you've a mind to do so.  Get it while it's hot (smokin')!
Posted by D A Bale at 9:57 PM No comments: