It's a Cover Reveal!

My fellow author and long-distance friend CW Browning has an upcoming release in her excellent suspense/thriller Next Exit series.  Pre-order for special pricing through the week of the June 12th release day by clicking HERE.  While you're at it, I highly recommend you pick up the first three books in the series too.

Without further adieu, here's the really awesome and explosive cover reveal for Next Exit Quarter Mile! 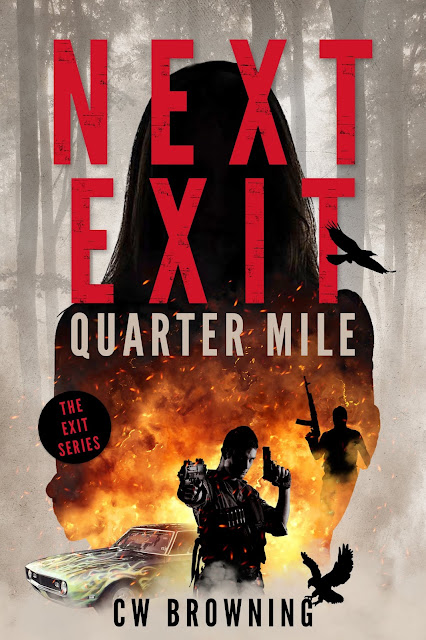 When Alina Maschik – code name “Viper” –  flees Syria, she has a serious problem. Someone knows much more than they should about the elusive assassin. With orders to lie low, Alina returns to Medford, determined to do just that.

But once again, New Jersey refuses to co-operate.

The Casa Reino Cartel is moving mysterious cargo up the Eastern seaboard; a tragic accident in the Pine Barrens kills a local street racer; FBI Special Agent John Smithe is looking for answers where there shouldn’t be questions; metro area hospitals are stockpiling a new antidote, and an invisible foe has zeroed in on Viper.

A web of intrigue stretching from Damascus to the Pine Barrens has been skillfully cast. Now, Viper must confront ghosts from her past even as she fights to unravel a sinister plot before thousands of Americans die.