Time Again For Some Southern Spooks 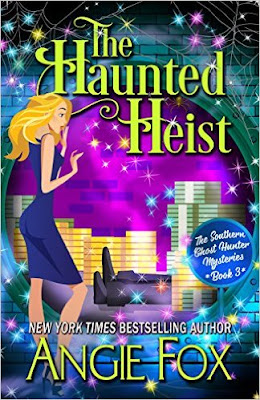 Today let's revisit a series of cozy mysteries by Angie Fox.  I'm talking the Southern Ghost Hunter Mysteries.  You can read my reviews of the first two HERE, but needless to say, I've enjoyed the colorful characters, creepy trips through history, and witnessed an unlikely pairing or two.

Plus I'm anxious to be on the front lines when Verity's almost-ex-mother-in-law gets her comeuppance.  It's long overdue in my book.

So time to introduce you to book three in the Southern Ghost Hunter Mysteries - THE HAUNTED HEIST.

Book Blurb:
Just because she can see the dead doesn’t mean Verity Long wants to spend her days hunting ghosts. Instead, she’s over the moon to land a marketing job at the local bank…until she finds her new boss dead in the vault. Even her ghost friend, Frankie, knows that's no way to start a career.

Relieved to let the police take charge, Verity steps aside, bound and determined to keep her ghost sightings to herself. But when she learns the main suspect in the murder is a very crooked, very dead mobster, Verity knows it's up to her to solve the case.

She teams up with her ghostly gangster buddy Frankie, as well as the irresistible and charming Ellis, as the three of them search haunted mob hideouts, hidden passageways, and historic cemeteries for the facts behind the heist of the century—and a modern-day motive for murder.

Too bad uncovering the truth could very well make Verity the next victim...

My Review:
Upfront confession time - I've really struggled with writing my review and rating this book.  There's nothing wrong with the writing in relation to structure, so I'll not belabor that issue.  It's just with this third book there was a lack of charm, humor, and wittiness I've come to expect from this series.  The first two were great.  This one...not so much.

Verity's still clinging to the antebellum manor left to her by her grandmother after Virginia Wydell went after her with a court order demanding repayment for the wedding Verity missed - namely with Virginia's good-for-nothing son Beau.  But if financial circumstances don't turn around soon, Verity may lose the little she still has left.

Enter Lauralee's uncle, returned from Chicago to take over First Sugarland Bank - and provide Verity with her first paying graphic design job since the epic breakup.  It couldn't have come at a better time, what with her own bank account inching closer toward zero.  But faster than you can say 'murder' circumstances again fall out of Verity's favor.  Now not only does Verity need Frankie's 'ghostvision' to help her solve this crime, but she might even have to resort to talking to the ghost of the area's most notorious hit man when evidence points in his direction.

But a ghost can't manipulate objects on this side of the veil - can he?

Like I said, I really liked the first two in this series, which is probably one of the reasons I felt let down with this installment. The humor present in the first two was completely lacking in this one, the characters seeming to go through the motions and yet falling short.  When things get tough for Verity, Frankie is usually there to offer up a differing perspective - no matter how odd.  But in book three, Frankie is down and depressed, unable to break free of being bound to Verity's property and depending on her to escort him around town via his urn.  The humor he usually provides is absent and he serves merely to bring Verity down and get her into one scrape after another, though she tries everything she can think of to help free Frankie.

Then we have the budding relationship with Ellis.  While I still like the dynamic of the secret relationship they have as the brother of Verity's ex-fiance, here Ellis forces the relationship more into the open, with no regard for the recent trauma Verity barely survived when standing up to the matriarch of the wealthy Wydell clan.  After the events of the second book, I was really hoping to see some of the results of that wrap-up here and see Ellis stand up to his mother.  Sadly, this never happens, which showed a surprising lack of compassion and complete disregard toward Verity.  Ellis even goes so far as to get angry with Verity and verbally browbeat her for her hesitation and fear of his mother, even though again nothing he's done up to that point provides Verity with any assurance he will stand with her in her corner.

The one thing in this book that did provide a little bit of humor was discovering the secret speakeasy, where the ghosts of the South Town Gang and other colorful characters from an era long gone regularly party and 'kill' each other nightly for fun and sport. Now that was a riotous brawl of good times.  But this was the only bright spot in an otherwise downer read.

Do I still want to read the next release in this series?  Certainly.  I have high hopes that at some point Virginia Wydell will get served with more than tea and scones.  Am I still waiting to witness Verity's inevitable rise from being trod underfoot by Sugarland's snooty elite?  Absolutely.  It's going to be totally cool now that Verity's secrets are out of the bag.  But for this outing I'll offer up three stars.

You can find Angie Fox's THE HAUNTED HEIST in eBook and paperback formats on AMAZON, BARNES AND NOBLE, and anywhere else books are sold.

New York Times bestselling author Angie Fox writes sweet, fun, action-packed paranormal mystery and romance. Her characters are clever and fearless, but in real life, Angie is afraid of basements, bees, and going up stairs when it is dark behind her. Let's face it. Angie wouldn't last five minutes in one of her books.

Angie is best known for her Southern Ghost Hunter mysteries and for her Accidental Demon Slayer books. She lives in St. Louis, with her football-addicted husband, two kids, and Moxie the dog.

Sign up here: http://eepurl.com/bUrBDT to find out when her next release is coming out.