Stay Out of the Rain - A Killer is Loose!

Or wait - I guess I'm talking about a rainy, cloudy day on a sunny day.  Hmmm.  So much for my feeble attempts at humor.  There is little humorous about a serial killer stalking unsuspecting women across the United States.  That's what we have here today, dear readers, from Michael J. McCann's The Rainy Day Killer. 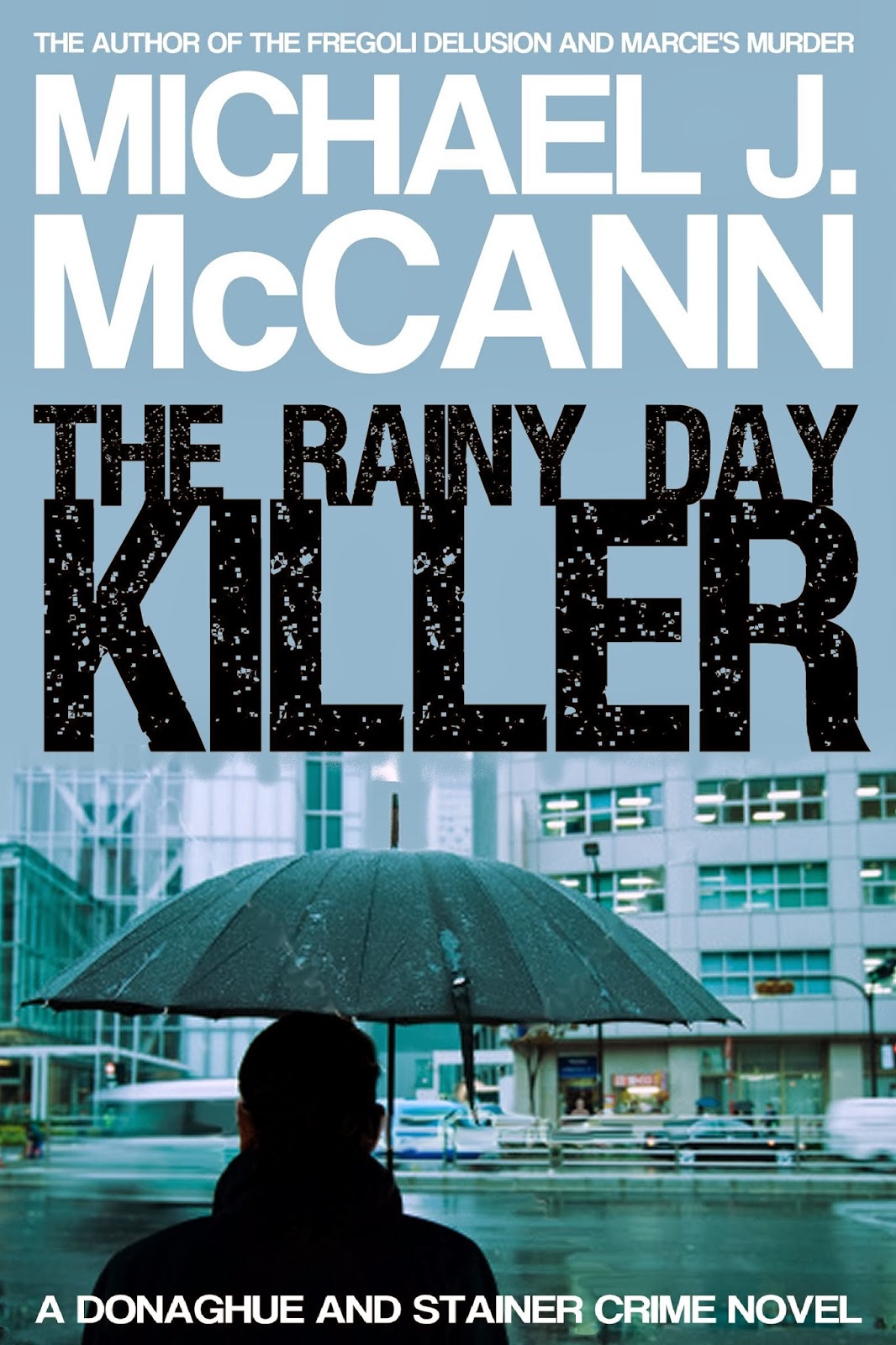 Book Summary:
A man in a business suit offers the protection of his umbrella to an unsuspecting woman, and several days later she turns up dead on a river bank, raped and strangled. The terrifying serial killer known in the press as the Rainy Day Killer is now hunting new victims in the city of Glendale ... whenever it rains.

Homicide Lieutenant Hank Donaghue leads the investigation as the killer begins to communicate directly to him through phone calls and grisly packages containing body parts of his victims. Assisted by FBI profiler Ed Griffin, Donaghue and Detective Karen Stainer pursue an elusive predator who leaves no physical evidence behind.

The timing couldn't be worse, however, as Karen Stainer's attention is divided between the investigation and preparations for her upcoming wedding. Distracted and uncertain about her future, Stainer is furious when she learns that the Rainy Day Killer has followed her to Virginia, where the wedding will take place, and that he intends to make her his next victim!

Hank Donaghue is a square peg in a round world.  He's a smart and savvy homicide detective, only saying something that's worth saying and yet constantly chewing on his cases like a dog trying to obtain the last edible morsel from a bone.  Precinct politics don't interest him, and he works hard to stay out of the fray after several hits against his character that continue to haunt him (though charges were baseless and from which he was exonerated).  Still, with the support of his team and the entire homicide division, he's forced to weigh the possibility of a move up the food chain, if only to protect the integrity and the very lives of those beneath him.

Hank's been hand-picked by a serial killer to be his spokesman.  The killer has moved around the country and is now taking up space in Hank's town.  Hank will play his game, if only to get him closer to a killer who thinks he's way too smart for anyone to catch - and he has been thus far.  Now the killer is upping the ante, because Hank is proving to be a more worthy opponent.

I really liked the character of Hank.  When it came to the d--- measuring of office and city politics, I could sooo relate to his desire to keep his head down and do his job to the best of his ability and avoid too much notice from higher-up's.  Unfortunately, doing a good job tends to get one noticed - and sometimes by the wrong people.  Then he has to put up with the short-term interim captain, Helen Cassion, as inept, head-strong (not in a good way), and self-centered, knee-jerk reactionary woman as I've (almost) ever seen.  McCann did a very good job in playing the dichotomy of these characters and their abilities - and lack thereof - against each other.

Karen Stainer - I want to know more.  I like her tough-girl, take-no-prisoners attitude.  She's a woman with tragedy somewhere in her past.  We get just a sniff of it here, but it is never really addressed.  That bothered me because I think knowing her a little deeper would have helped me connect with her on some other level.  Perhaps this was dealt with in a previous book, but coming into the series mid-stream, I'd have liked getting more of this part of her than what was offered here.  It left me feeling like she was not quite fully fleshed-out.

Though I love the interplay between her rough and tumble, street-smart cop attitude (with a vocabulary to boot) and her almost southern belle, wealthy and refined with all the right connections soon-to-be mother-in-law.  When the killer sets his sights on Karen as his next victim on the eve of her wedding (and before I forget, the to-die-for wedding dress shopping scene - you'll know it when you read it), the cake flies between Karen's actions to prove she can protect herself and those around her and the mother-in-law.  The only, truly laugh-out-loud moment in an otherwise serious novel.

The mystery itself isn't too complicated.  I had no trouble "seeing" the killer when he'd make appearances.  This frustrated me somewhat because it was too easy to spot the issues early on and I didn't expect it would take so long for the detectives to put so many of the elements together, though I do understand that there would not have been a story otherwise.

From the first few pages, there were so many names and characters tossed into the fray that I had trouble keeping track so much of the time.  There were several points throughout the story where fully named characters were thrown in but really didn't have much to do with the story.

I also felt that probably a hundred pages could have been culled from the story.  So much of the book got into rather unnecessary description of procedure and too detailed of scene that it really slowed the pace to a crawl at times.  There was an awful lot of telling rather than showing.  Showing allows the reader to be in the immediacy of a scene while it is happening.  Telling just explains to us what happened after the fact, like more of an omniscient point-of-view post event.  Being in the midst of the action, while it is happening (showing), increases pacing and speeds the story up in order to get the reader's heart pounding.  Hurry!  You've gotta find the killer and fast!  At the end I did get a sense of immersion in the action.

Which brings me to my last issue - really more of a personal one.  I admit, I'm rather a purist when it comes to point-of-view, as it helps the reader truly feel immersed in the story and the character as if they are living it right there inside the character's head.  Because there was so much telling of events after the fact, in many scenes it was difficult to know which character's head I was supposed to be in.  But again, this is a big issue for me since I typically read thrillers.

In the end, overall I liked The Rainy Day Killer.  It has some interesting aspects to the story, but mostly because I enjoyed the main characters, particularly Hank.  I also really liked the cover and the rather sepia blue effect.  Really cool.  I'm also considering checking out some of the earlier works in this series to see if I can get to "know" Karen a bit better.  The hint of a back story intrigues me.

I'd give it three and a-half stars.

Michael J. McCann was born and raised in Peterborough, Ontario, Canada. He earned a B.A. (Hons.) in English from Trent University and an M.A. in English from Queen's University. He has worked as an editor and a project and training consultant and manager with the federal government. He is an author of crime fiction and supernatural thrillers. His Donaghue and Stainer Crime Novel series includes Blood Passage, Marcie's Murder, The Fregoli Delusion, and The Rainy Day Killer. He is also the author of the supernatural thriller The Ghost Man and is currently working on another supernatural novel.  Visit his website at http://www.mjmccann.com/