Among the wind whipping through the trees and scattering the smattering of autumn's leftover leaves, I bring to you a book with a cause.  Tonight we review Rebecca Demarest's debut novel, Undeliverable. 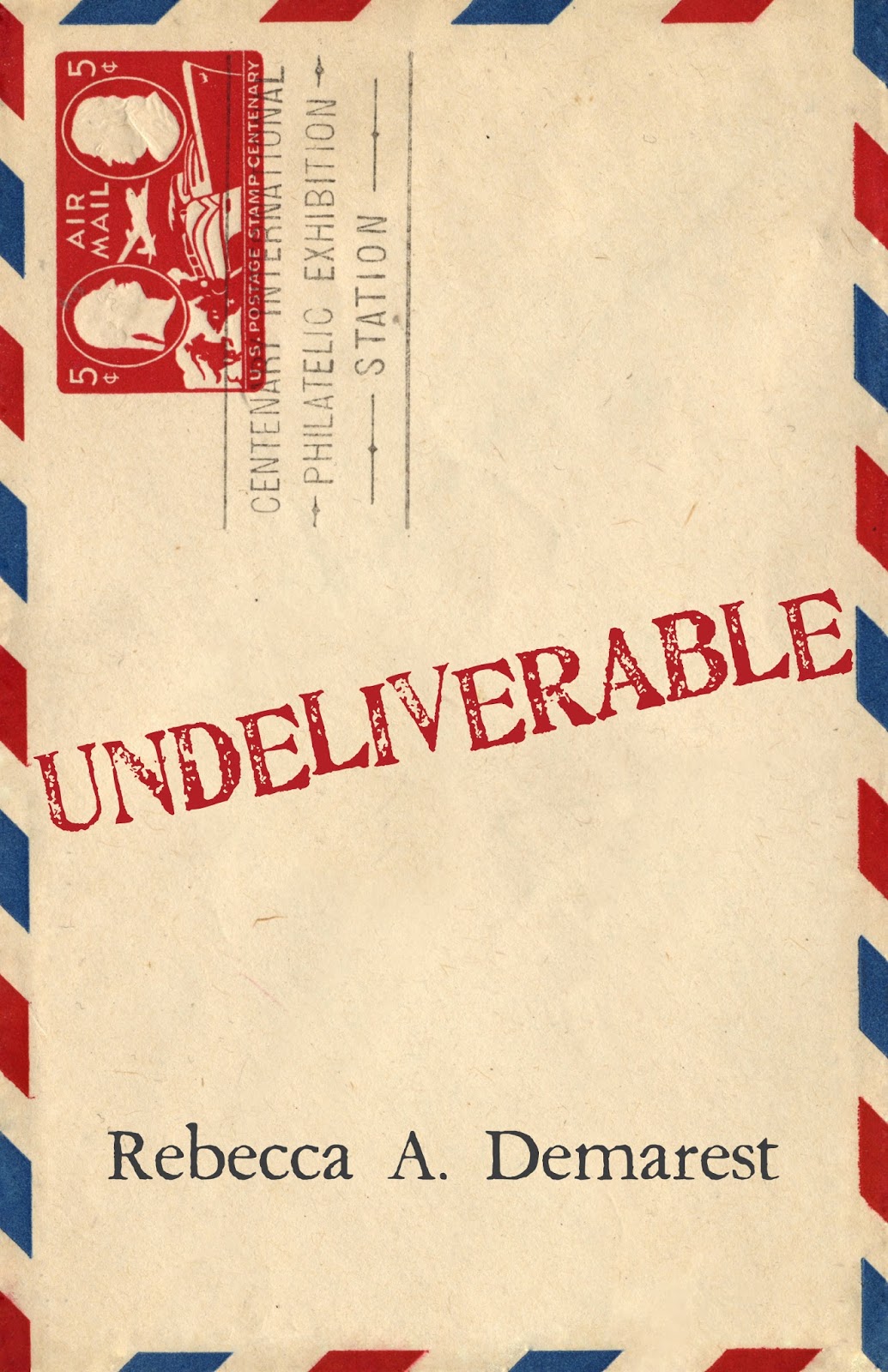 Book Blurb:
When Benjamin Grant's son disappeared a year ago, he felt it was his duty as a father to do everything in his power to find his son, and he tried.  He threw himself into the search, but his obsession left him without a home, wife, or job.  Now he's managed to find work at the United States Postal Service's Mail Recovery Center, which he hopes will prove an invaluable tool in his search.  With the help of Sylvia - a kleptomaniac artist - Ben learns the ins and outs of a warehouse full of lost mail and explores every lead in his son's case.  But when that investigation leads him to Leonard Moscovich, Ben fears the worst.

My Review:
First off I want to draw attention to the fact that your purchase of Undeliverable helps to support the National Center for Missing & Exploited Children (NCMEC).  To learn more or donate to the Center's efforts, visit www.missingkids.com

Ben Grant is a driven man - and being driven mad.  His overwhelming desire to find his son, now missing a year, has destroyed the happy life he once lived.  Everything he is, everything he does, everyone he meets is nothing more than a means to an end - an end he tenuously clings to merely to get through the mundane activities of his day job in order to get back to his "real" job.

That of finding his one and only son.

His driving need has separated him not only from his son but his wife, his home, and their joint business venture.  Settled in a new city and into a new job, Ben returns home every night to a virtually empty home save for the desk piled high with news reports, police tipline transcripts, and a wall dotted with maps pin-pointing everywhere his desperate search has taken him.  This is, of course, because in his eyes the police don't care.  They've moved onto bigger fish to fry and left him to do the job they wouldn't - or couldn't - do.  Doesn't matter to Ben.  He's more than capable of finding his son, that is if he doesn't increasingly drink himself into a stupor every night.

Undeliverable is heartbreaking!  Ben's grief, fear and grasp for hope is palpable.  At times it overwhelmed this reader.  But that's when Sylvia would step into the picture.

Sylvia was the breath of fresh air the novel needed to keep from sinking into a mire of despair.  She was witty, charming, a little loopy and rather Pollyanna'ish in that she worked so hard to find the silver lining in every situation and throughout each day.  And it took a lot of her determined spirit to pull Ben out of the dumps from time-to-time.  But Sylvia too has darkness in her past - but she's also come to terms with it and learned how to keep the past in perspective to avoid having it crash upon her present and future.  Sylvia was the life-blood of this wonderful novel.

Then there are the "Bunion'isms" that begin every chapter.  I came to look forward to a new chapter, knowing I'd get a nice little funny to break into Ben's frustrations.  Ben's predecessor left him a huge, personally constructed manual to help him understand the in's and out's of his position.  I'd have loved a chance to see Madam Buin in the pages here - as a matter-of-fact, I rather feel like I did through her instruction book. :-)

So getting down to brass tacks, point-of-view was strong and handled nicely with appropriate scene breaks.  As a reader, I felt Ben's pain and anguish, his frustration and anger, and then his horror when the police finally caught a pedophile due to his research, then felt his anxiousness as he waited to find out if one of the small bodies found on the farm was little Benny.  We followed along with him through all of this, so showing was excellent.  There were very few editing issues.  Major thumbs up!

However, because of the subject matter, please realize that this can at times be very difficult to read, but that's also because it is so well written and you feel Ben's pain so deeply.  There were a few f-words but nothing overly gratuitous.  Maybe I'm feeling generous because of the fact that this elicited such strong emotion in me as a reader, but Undeliverable earns from me a rare five stars.

Rebecca A Demarest is an author, designer, and illustrator living in Boston, MA.  She has had stories published in several journals including Epiphany and Far Off Places, and Undeliverable is her debut novel.  In her spare time, she crochets, gardens, and goes climbing with her boyfriend.  Connect with her through her blog www.rebeccademarest.com on Twitter @RebeccaDemarest and on Facebook http://www.facebook.com/RebeccaADemarest