Release Day for THINK BEFORE YOU SPEAK 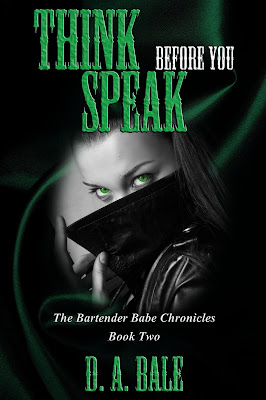 Today it's official - the release day for THINK BEFORE YOU SPEAK, the second outing in the Bartender Babe Chronicles.

This time Vicki Bohanan's mouth runneth off with her brain - and she must find a way to get it under control before Reggie's secrets are spilled.  Find out more below.

Book Blurb:
Vicki Bohanan is at it again, and this time she’s sporting a whole new reputation.  On the eve of preseason football, blackmail lands at her feet – and for a woman with an attitude the size of Texas, it’s gonna take more than a pigskin to plug her pie hole.

Especially when the old reputation continues to nip at her like a never-ending hangover.  A Texas Ranger, her undercover boss, and a patron affectionately dubbed ‘Radioman’ walk into the bar and keep Vicki’s head whirling like a ride at the state fair.  All she wants is to move back into her remodeled apartment to escape the madness.  So when her Aussie model sometimes squeeze invites her to San Antonio for a shootout at the Alamo – cameras this time – Vicki saddles up for a ride.

Then runs smackdab into an unexpected hitch by the name of Reginald von Braun.  Reggie’s got secrets hidden behind secrets, and someone else has discovered the truth.  With blackmail in the bargain, Vicki must determine the culprit who has threatened to expose Reggie’s past right when he’s on the cusp of finding a future.

All while protecting his revelations, hard to do when you’ve got that dreaded disease known as foot-in-mouth – and when you’re fighting off multiple men with an eye on your goods.

How many men can one woman fend off?  As many as Vicki can handle in book two of the Bartender Babe Chronicles.  Bring it on, boys.

Grab your copy today by clicking here on Amazon Apple B&N Kobo and anywhere else ebooks are sold.  Watch for the paperback coming by the weekend.

And if you haven't had a chance to get into this series, you can pick up the first book in the Bartender Babe Chronicles for the rootin'-tootin' sale price of only ninety-nine cents, now through summer's end.  Get LOOK BEFORE YOU JUMP while the weather's hot!

Coming Soon and a Sale 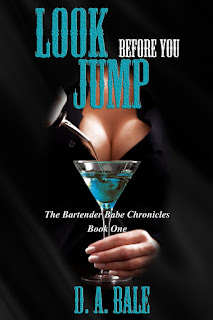 As part of the upcoming release of THINK BEFORE YOU SPEAK, the second in the Bartender Babe Chronicles, I've put the first eBook in this cozy mystery series on sale for only ninety-nine cents.

So for the remainder of the summer you can pick up an eBook copy of LOOK BEFORE YOU JUMP for .99.  Then stay tuned for the June 15th release of THINK BEFORE YOU SPEAK, and join Vicki Bohanan for an irreverent and fun jaunt through the mysteries of life.

And don't forget!  You can still enter for a chance to win one of ten paperback copies of LBYJ by clicking on the GoodReads link at the top right on the blog.  But hurry before entries close.