It's been awhile, dear readers, but I recently came across a delightful cozy mystery series and wish to share it with you.  Previously I'd read the first in Angie Fox's Accidental Demon Slayer series, so I was familiar with her work there.  This new series is also well-written and a bit more interesting to a historical buff like me - plus it has a wonderful array of ghosts from the Civil War era.  What could be better than that?

Since I've already posted reviews on Amazon, I'm doing things a little backward and am just going to cut and paste said reviews here.  They're not my usual anal-nut-bag compilations, but hopefully they'll still tweak your interest in trying out the Southern Ghost Hunter Mysteries. Enjoy! 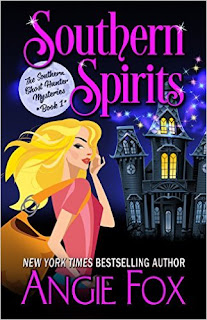 Southern Spirits Book Blurb:
One simple mistake…
For a girl who is about to lose her family home,
Releases the ghost of a long-dead gangster,
And opens Verity Long’s eyes to a whole new world.

When out of work graphic designer Verity Long accidentally traps a ghost on her property, she’s saddled with more than a supernatural sidekick—she gains the ability see spirits. It leads to an offer she can’t refuse from the town’s bad boy, the brother of her ex and the last man she should ever partner with.

Ellis Wydell is in possession of a stunning historic property haunted by some of Sugarland Tennessee’s finest former citizens. Only some of them are growing restless—and destructive. He hires Verity to put an end to the disturbances. But soon, Verity learns there’s more to the mysterious estate than floating specters, secret passageways, and hidden rooms.

There’s a modern day mystery afoot, one that hinges on a decades-old murder. Verity isn't above questioning the living, or the dead. But can she discover the truth before the killer finds her?

My Review:
First off a little clarification on the ranking - 4 1/2 stars (I wish they offered half stars for reviews). I've previously read the first book in Ms. Fox's Demon Slayer series, so when this popped up on my radar I thought it sounded fun and interesting with the ghostly element instead of demons, vampires, and all the other popular supernatural characters these days.

We open with Verity after a desperate estate sale in attempt to save the beloved antebellum home she inherited from her grandmother. The only things Verity held back from the auction block were her futon, her grandmother's wedding ring and handmade quilts, and an awful decorative urn given to her by her fiance - that is, her ex-fiance. But even with the sacrifices she's still $20,000 short, and the vultures are circling to collect on the bill after she dumped the most eligible catch of Sugarland, Tennessee at the altar. A mother will do anything out of revenge for a jilted son, even if it means taking the ex for all she's got and destroying Verity's name in the process.

So call Verity surprised because the urn is full of dust and no amount of scrubbing will get all of the crud unstuck from the creases and crevices inside. But it isn't dust but ashes, leaving her with a ghost not only bound to the grounds where she dumped and watered them in with her roses but bound to the urn - and wherever the urn goes Frankie's ghost does as well. Like Verity needed anymore complications.

But then a killer awakens from slumber, and Verity needs Frankie's help and 'ghostvision' to solve a decades old murder. That's when you-know-what hits the fan.

I really enjoyed this well-written story, though it wasn't difficult to spot the who-done-it-character. We're brought right into the drama and led along the way as things unfold. Verity's backstory and recent troubles come out in bits and pieces, not dumping the reader with paragraph after paragraph of telling what happened but leading us along the way by showing as the storyline and characters progressed. The story had elements of humor and mystery that held interest without going overlong. It was pretty much the perfect length.

The only thing I'd liked to have had a bit more of was the description of the distillery and the whole tunnel aspect. I found this very difficult to picture and follow at times. But this was merely a minor annoyance. Initially I also realized the story didn't have much colorful language to trip over - and I found that rather pleasant. But then one use of the f-word was thrown in at random and felt very out-of-place, as if only utilized for shock value. I'm no prude and am used to reading material with sometimes hard language, but this just didn't seem to fit with the overall tone of the story.

The biggest praise any reviewer could give to a novel in a series is to say they want to read the next one. Now I'm off to buy book two! 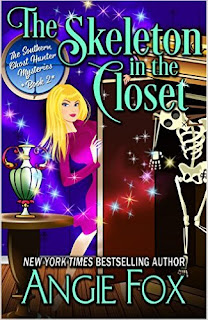 The Skeleton in the Closet Book Blurb:
A haunted library is no place for a girl who can see ghosts, but when Verity Long stumbles on a dead body in the middle of the main reading room, she has to believe someone…even a dead someone…must have witnessed the crime.

Her ghostly sidekick Frankie warns her to stay out of it. The very alive, very handsome deputy sheriff, Ellis Wydell, inadvertently places her directly in the middle of it. And her ex-fiancé, Ellis’s brother, is back with an agenda of his own.

Undaunted, Verity presses forward, uncovering scandalous secrets, long-forgotten ghosts, and a shocking trail of clues that places her directly in the path of a killer.

My Review:
I received a free copy of this novel from NetGalley, but it has no influence on my review.

After reading the delightful first book in the series, I was pleased to have the opportunity to read this second as well. The mysteries are light, the characters engaging, and there's plenty of ghostly fun - especially with Frankie.

'Skeleton' opens weeks after 'Southern's end when the entire town of Sugarland, TN is preparing for their annual Civil War reproduction honoring events surrounding the Cannonball in the Wall, when Union and Confederate troops clashed and the Gray chased off the Blue. As one of the busy-bee workers at Sugarland's library, Verity's sister Melody is swamped with never-ending preparations for the library dinner, auction, and memorabilia display highlighting the two most influential - and bitterest of rival - families in town.

Did I also mention one of those families is overseen by her ex almost mother-in-law? You remember - the one who sought to ruin Verity after leaving her beloved baby boy standing at the altar.

Now Beau is back and trying desperately to reclaim what was once his - even though he has no clue that his current rival for Verity's affections is his older brother. Yep, Deputy Sheriff Ellis Wydell, middle son and black sheep of the family when he chucked the legal legacy and struck out on his own in favor of serving God and country, has taken a shining to Verity and her ghost-seeing abilities. And now he needs her more than ever to help solve the murder of Melody's assistant on the eve of the town's biggest holiday this side of Christmas.

Cue Frankie, the gangster ghost of Ellis' great-great uncle and Verity's sidekick after he was 'grounded' when Verity mistakenly emptied his ashes and thoroughly watered them into one of her grandma's prized rose bushes. It's gonna take more than Frankie's ghostly powers to clean up the mess this particular murder leaves.

Once again, we have our familiar cast of ghosts back to haunt this story: Jilted Josephine, Ma Hatcher, and of course, Frankie, along with an ever growing assortment of spooks and specters of varying backgrounds and abilities. I really enjoy how Verity calms and helps some of those disturbed ghosts move on a la Ghost Whisperer, yet the lighthearted atmosphere of the story rarely dims and gets too serious. She's become even more of a shoulder to cry on in this installment, and even though she's terrified, Verity always shows her strength and perseveres - because it's the right thing to do.

I also enjoyed how the key events from book one were woven into the earlier chapters of the second novel without laying down a huge bunch of telling by info dumping. POV stays clearly with Verity throughout and we are once again led through a fun maze to reveal some great elements for some of the characters and not so great situations for others - which has me dying to read the next novel in the series to see how this moment of comeuppance plays out long-term.

My only complaint is that the perpetrator was rather obvious, yet the motivation for stooping to murder/attempted murder didn't feel fully fleshed out. The red herring was also quite obvious, and yet when it is shown this individual had knowledge of the events and the cover-up yet no direct involvement in the murder, nothing happened to this person. I'm trying to be very careful here so I don't spoil anything for future readers, so I'll stop with this.

Again, a well-written second installment to this series, with good characters, fun situations, and an engaging plot even with the shortcoming noted. I look forward to the third release.

Purchase either Southern Spirits or The Skeleton in the Closet on Amazon or for your eReader of choice.

and romance. Her characters are clever and fearless, but in real life, Angie is afraid of basements, bees, and going up stairs when it is dark behind her. Let's face it. Angie wouldn't last five minutes in one of her books.

Angie is best known for her Southern Ghost Hunter mysteries and for her Accidental Demon Slayer books. She lives in St. Louis, with her football-addicted husband, two kids, and Moxie the dog.