What Happened to the Amber Room? - Gil Cope's "The Amber Conspiracy" 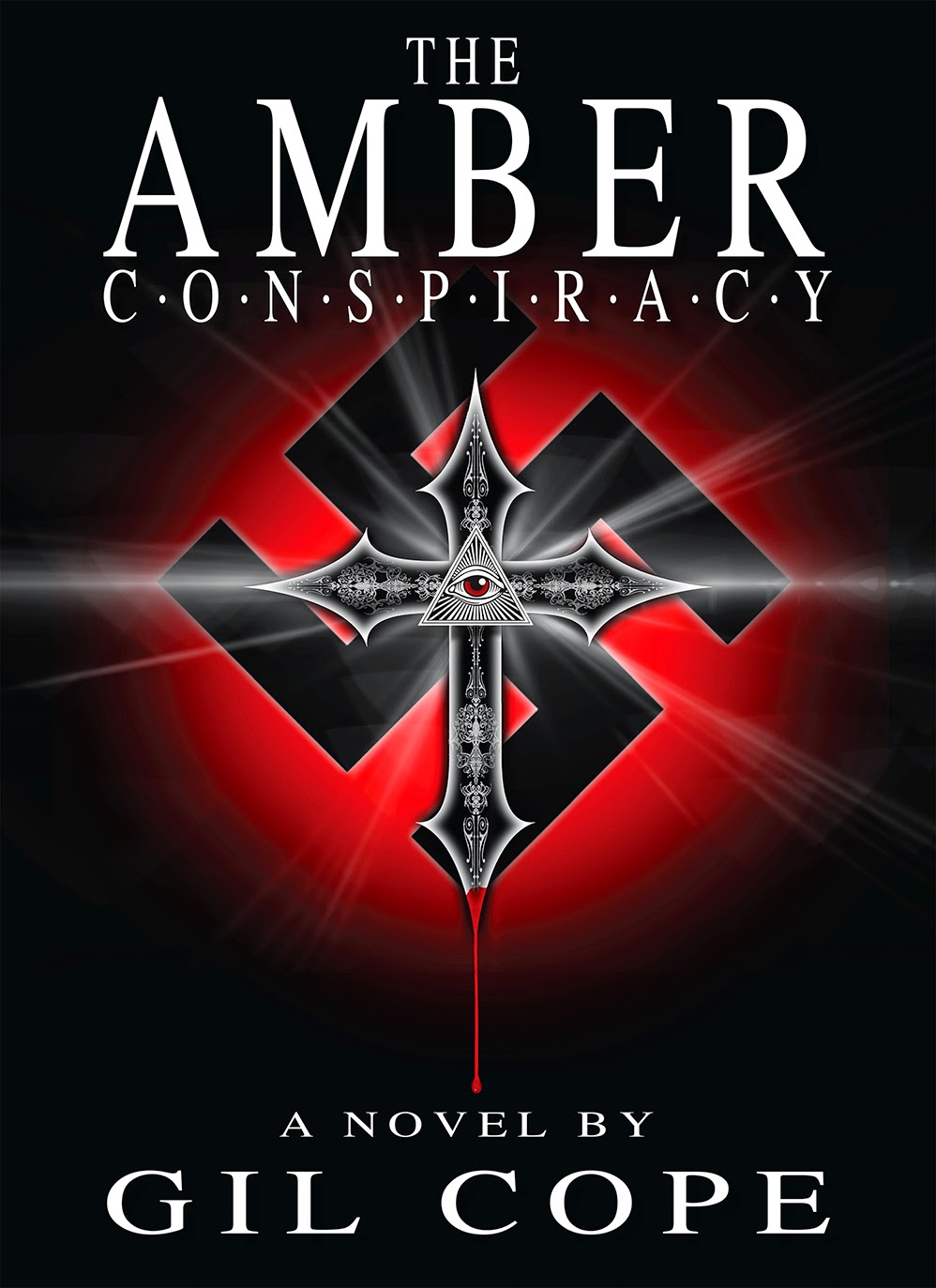 All my life I have studied and read about the historical accounts of tsarist Russia, from the love affairs of tsar and tsarina alike to palace intrigues and revolutions that turned rule and ruler on its head, but most of all to the multitude of treasures created and confiscated during the Romanov dynasty.  My dream is to someday tour the palaces of St. Petersburg and Tsarskoe Selo and see her treasures up close and personal.

But most importantly, to someday know what happened to the infamous wonder of the world - the Amber Room.

Was it destroyed in the closing days of Nazi Germany like many scholars believe?  Does it still exist, hidden away in some secret underground Nazi fortress or cave or buried deep in the earth like so many other discoveries by allied troops?  Will I and the rest of the world ever have a chance to behold its awesome beauty?

When author Gil Cope approached me about reading his fictional tale The Amber Conspiracy, I subtly responded with a resounding YES!  Yes, it is fiction.  Yes, it strays from science.  No, it isn't an accurate representation of what really transpired.

But it's a novel about the Amber Room!  How could I possibly say no? 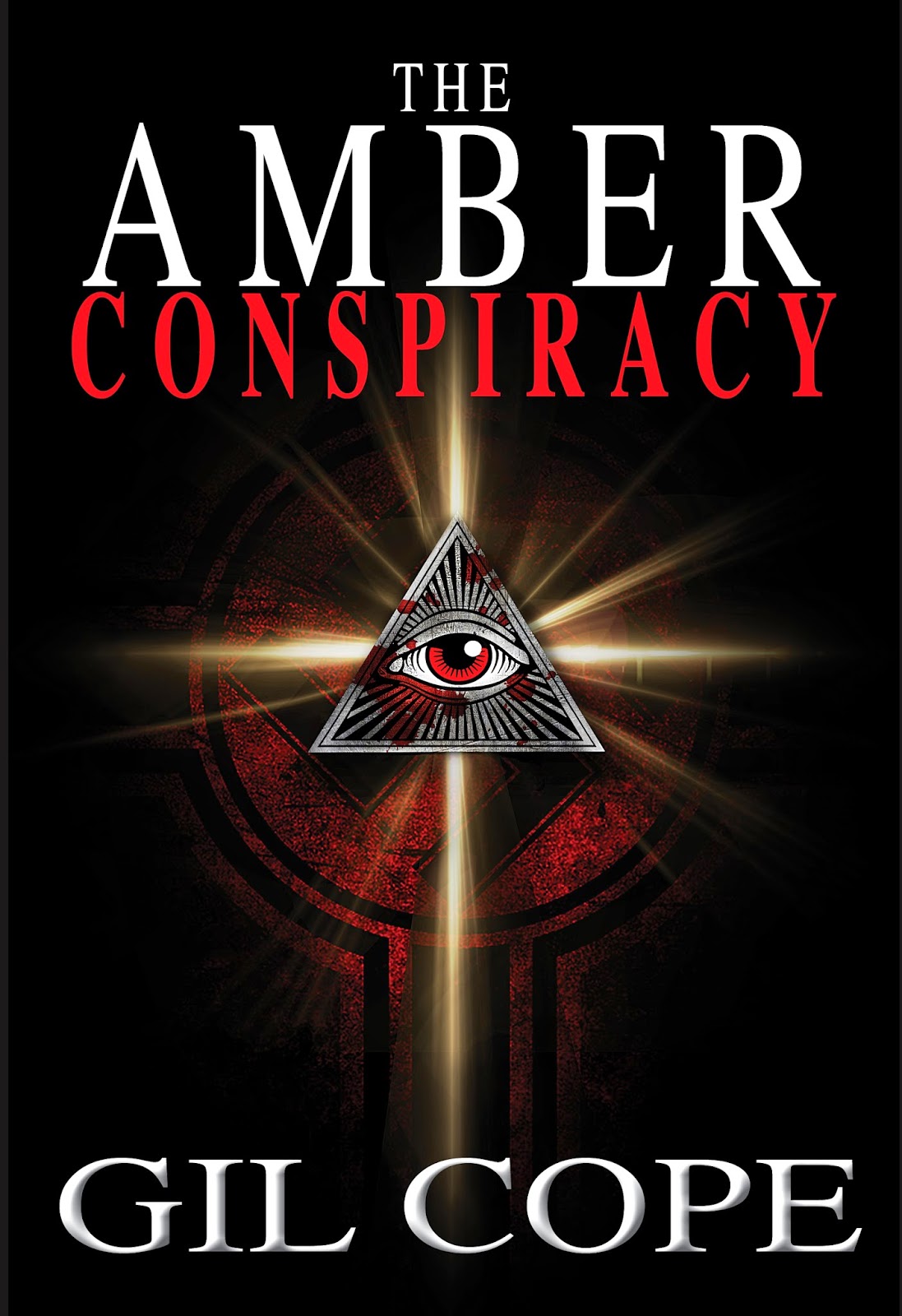 murder of renowned Amber Room expert Urie Roskopf.  Jack soon begins to suspect that Roskopf's death is somehow connected to the missing eighth wonder of the world, The Amber Room.  It's his belief that the priceless treasure, created by the Prussian King Frederick I in the 18th century, has ties to a sinister secret society, the Illuminati.

If Jack's suspicion is correct, then there's little doubt that the Illuminati are responsible for Urie’s death, which leaves Jack and Urie's granddaughter, Kira Solomon, to solve the question of how to penetrate the most secretive society in the world.

Simultaneously, we go back in time to track the story of a sacred relic, which we first discover being rescued by a band of warrior monks during the sack of Constantinople, then later as it comes in and out of the possession of the Knights Templars, the Freemasons and the Nazis before eventually making its way to the Illuminati and the Amber Room.

The tenacious duo's dogged persistence in locating the Amber Room and unraveling the mystery surrounding Roskopf's murder places them in the crosshairs, as their investigation threatens an audacious plan by the Illuminati to bring down their centuries-old nemesis, the Catholic Church.

My Review:
UPDATED 3/29/15 - After an extensive re-edit of this novel, the majority of the issues cited in my original review have been fixed and/or restructured. Therefore, I am changing my ranking from a four to five star. Highly recommend The Amber Conspiracy!

ORIGINAL REVIEW - First off, I want to say that I have never read any of Dan Brown or the myriad other Catholic conspiracy thrillers out there.  However, I've read a multitude of World War II, Russian and Amber Room historical accounts.  I'm also a huge thriller buff, so I will approach this review from that of an historical thriller.

And in that context, I really enjoyed reading The Amber Conspiracy.

Our story opens in Constantinople in the year 1204 where a priest is desperate to save the Relic from marauders and crusaders.  From the hands of a cowering, young boy to those of William de Chartress, the Relic is placed into the protective custody of The Order while a forgery is sent to the Vatican.

Forward to present day, Jack Morgan, author, explorer, and treasure-hunter extraordinaire, is hired by New York's Metropolitan Museum of Art to assist in sagging attendance by announcing an expedition to trace, discover, and retrieve the long-lost Amber Room, panels and furniture constructed in the 1700's entirely out of rare and precious amber.  However, on the evening of this glorious announcement, Jack's long-time friend and fellow researcher is murdered on his way to their rendezvous - in his briefcase a small piece of crafted amber.

With the assistance of Urie's granddaughter, Kira, a former Mossad operative, Jack sets out to discover not only the final resting place of the Eighth Wonder of the World, but who killed his dear friend - and why.

There were so many aspects I loved about The Amber Conspiracy.  The historical reality of what is known about the Nazi's and the Amber Room's last known location in the final days of World War II and the speculative fictional pieces were woven very nicely throughout this story to give a seamless account in that regard.

Intrigue about who killed Urie, the why's and how he came to possess a piece from the Amber Room's panel led our characters on an exploration of explosive proportions (literally).  From the lecture hall at the Met to Urie's study to an underwater dive and a hijacking amid the high seas, the thrills and chills ramped up and kept pushing our hero and heroine across the globe.

The slips back in time to follow the path of the Relic from the hands of the Knights Templar to the Freemasons and into the hands of those known as the Illuminati never felt jarring and wove through the overall tale in such a way to keep you guessing - for the most part.

I do have to admit, it was pretty easy to figure out who was in charge of the Illuminati and their ultimate goal, but the action amid the journey was still a rush.  I got a good chuckle of the intended irony when introduced to the character of Mary-Jo.  Read it and see if you catch the little funny there.

Even with the good story, there were still some issues with structure.  Point-of-view within a scene slipped in and out of so many characters sometimes it was hard to engage with them, to feel what they felt and to see what they saw.  Much of the time I felt like I was merely watching events from afar instead of embodying the characters.  Many times even scene went from one locale to another without any sort of scene break.  These were especially jarring and more numerous toward the novel's end.  However, pacing moved along at a nice clip throughout most of the story, with only a few bog-downs when it deviated from the main storyline and action too long or description grew overlong.

Editing needs a second round, though much of this is easily fixable.  Periods instead of comas were used most of the time to separate dialogue from the corresponding dialogue tag.  At one point Jack and Kira checked into a hotel as Mr. and Mrs. Johnson but on the very next page turn the concierge called them Mr. and Mrs. Baxter.  Several times a correctly spelled but wrong word was used (ie. prosperity instead of posterity) and small words missing or needing an 'ed' on the end.

Lastly, there was one thing that stuck in my craw - probably because I'm a woman.  I'm trying to avoid spoilers here, but skip this paragraph if you don't want to know even the teeniest smidge of something in the story.  About a third of the way into the novel, a couple got engaged during the first week of July and then the two women are on their honeymoon in Europe for a certain procedure (that in itself would probably take months of screening) not even a month later???  Two wealthy women.  No wedding planning.  No time allotted for preparations for either the honeymoon or the procedure.  Nuh-uh.  The time scale didn't compute in my book - though I do understand the necessity to rush this for the story to work.  It just left me shaking my head - and yes, I know I'm being picky here so again, chalk it up to my being a woman and the ingrained need to 'plan' to the nth detail when it comes to such events. :-)

But like I said, I still enjoyed The Amber Conspiracy overall - a nice action/adventure conspiracy thriller.  Just as a caution - there is plentiful usage of the f-word and lots of assorted rough language.  A few gruesome scenes and a couple of tame sexual situations.  If you don't think you can read a novel for the story only and are concerned about getting caught up on philosophical or theological entanglements, this probably isn't something you'll enjoy.  But if you like a novel that speeds through, has lots of action, murder and mayhem and engages the brain with intriguing historical elements, then The Amber Conspiracy might just be for you.

Even with the aforementioned structural issues, the solid and engaging plot (and my love of Amber Room lore) lead me to a solid four-stars.

Pick up a copy for yourself on Amazon and Barnes and Noble.  At over five hundred pages, be ready to invest some time.  Check out the two different covers and let me know which one you like better.

fashion photographer Francesco Scavullo before opening his own studio. Mr. Cope was soon in high demand by such clients as Revlon, Christian Dior, Dewar's, IBM, Chivas Regal, Concord Watches and Clairol, to name a few. His photographs have appeared in countless major magazines, and have earned Mr. Cope numerous advertising awards.

Turning his attention to directing commercials, Mr. Cope has shot hundreds spots for some of the world's leading advertisers: Levis, General Motors, Coke, Pepsi, Hilton, Boeing, Anheuser Busch and Mercedes, to name but a few. Mr. Cope's commercials have run on such high-profile broadcasts as the Oscars, Grammys, Emmys, and the MTV music awards.